All FeaturesAstronomy with Brian Watkiss

Here we are in the middle of October already and the nights are really drawing in with sunset occurring at quarter to seven at the start of the month and as early as four in the afternoon at the end of November.

Of course this is in large part due to the clocks going back on the 25th but even so, dark? Just after your afternoon cup of tea? Still, it does mean we can start planet-spotting nice and early.

So it is that as soon as the Sun has gone from the sky, there in the south is the giant planet Jupiter. As it gets darker, it will continue to dominate this part of the sky, as, indeed, it has done for a couple of months now.

Again, once it is sufficiently dark, you should be able to spot Saturn just to the left, closer now than it has been and getting closer each day.

Another fascinating world has been visible later in the evening for a while now. It is of course the most studied of planets, Mars and you can find it over in the south east at about the same height as Jupiter.

It already has several orbiting satellites from various nations and, of course, the incredibly successful but alien looking Curiosity rover roaming the surface, even taking pictures of itself (although it’s hard to tell if it’s smiling!) Now there is a new rover on its way to join in named Perseverance and it is due to land in February.

If you are up and about early in the morning, perhaps on a bleary-eyed deer-spotting walk, you should easily spot that other super-bright planet, Venus. It’s quite high in the southeast and stays at a similar height till towards the end of November.

The miniscule Mercury swoops up from the horizon for a few days around November 11. Reaching about half the height of Venus, it can be tricky to see but try with binoculars first.

Venus has been in the news recently as there may be signs of alien life in the atmosphere. Well, some scientists may have spotted the spectral line of Phosphine in the atmosphere and it is thought that it could only be produced by bacteria, but there may be weird chemistry going on under those high pressures.

A probe to collect samples would seem to be the only way, but do we need any more strange microbes here right now?
October 20 is the peak of the Orionid meteor shower. This is one of the major showers of the year so it is always worth taking some time to observe. You can look a day or two either side of the 20th at the darkest part of the sky you can find and they will usually be at the edge of your vision.

It is helped this year by the fact that the Moon is just a few days old, having been full on October 1. It will be full again on the 31st but unfortunately, just because its orbital period doesn’t line up with our weird and wacky calendar doesn’t mean it will turn blue.
Also, look out for the scheduled launch of the second manned Crew Dragon by SpacEx on this date. It worked so well last time, let’s hope for another successful mission this time. 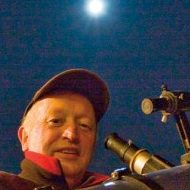 Brian Watkiss
Brian has been getting Villagers to look skywards since 2009.

people3341events and occasions1819Alvechurch1638Readers' Views929News729
Previous article
BACK TO THE ROOTS
Next article
How did Mop fair go ahead?