Lure of the sky at night 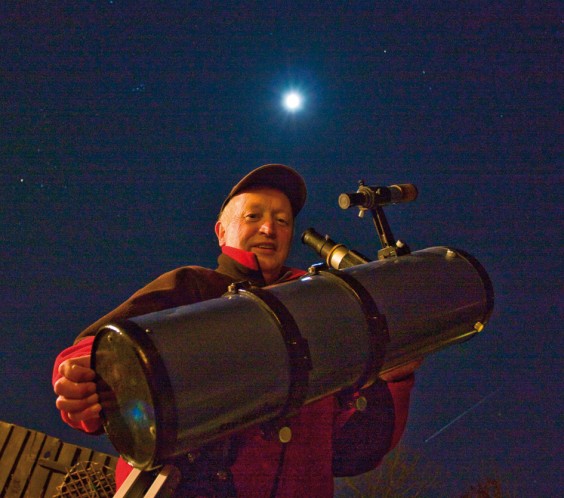 Alvechurch amateur astronomer Brian Watkiss explains what makes him spend so much time staring into the night.

I was very young when the space race started but as I got older I took a greater interest. The Apollo missions were the highlight and I read everything I could about them and, of course, followed them eagerly on the two television channels we had at that time.

Following on from that came an interest in space generally and especially easily viewed objects such as the Moon and planets. I’ve always been amazed that you can see satellites orbiting overhead and many times family and friends have inwardly groaned after being dragged outdoors to stare at the night sky.

I got my first telescope as a present about 20 years ago – a three-inch refractor and was thrilled when the very first object I viewed was Saturn.

After the planetary alignment of 2000, when four planets could be seen strung out across the sky, I upgraded to a six-inch reflector, another present from my wife, which I still use now. This is great for seeking out nebulae and star clusters, my favourites.

After taking early retirement three years ago, I got a four-inch telescope with computer drive, which I can take with me on our travels in our camper van. I dabble in astrophotography, with limited success, but mainly I love just observing. In fact, I am just as likely to grab my binoculars for a quick peek during a break in the clouds.

Alvechurch isn’t too bad for observing. The view to the north is largely washed out by the lights of Birmingham, but to the south – where all the planets lie – although affected by Redditch, it is good enough for some great observing.

Anyway, my garden is south facing, so I have no view to the north and very restricted to the east. If you can get away from the village centre, then some fairly dark skies can be found.

I often take my binoculars with me when I walk to a certain canalside pub, either for a better view of the western horizon or for glimpsing fainter objects away from the street lights. A really good view of the western horizon, needed to see the planet Mercury for instance, can be had from the top of Coopers Hill and I have travelled to the Lickey Beacon to try to catch a glimpse of a comet.

Of course, you can see the sun from anywhere and the latest present from my wife is a solar filter. Although the sun is completely blank at the moment, I am ready for the next cycle of sunspot activity. But please note, never look at the sun either with naked eyes or especially through an optical instrument!