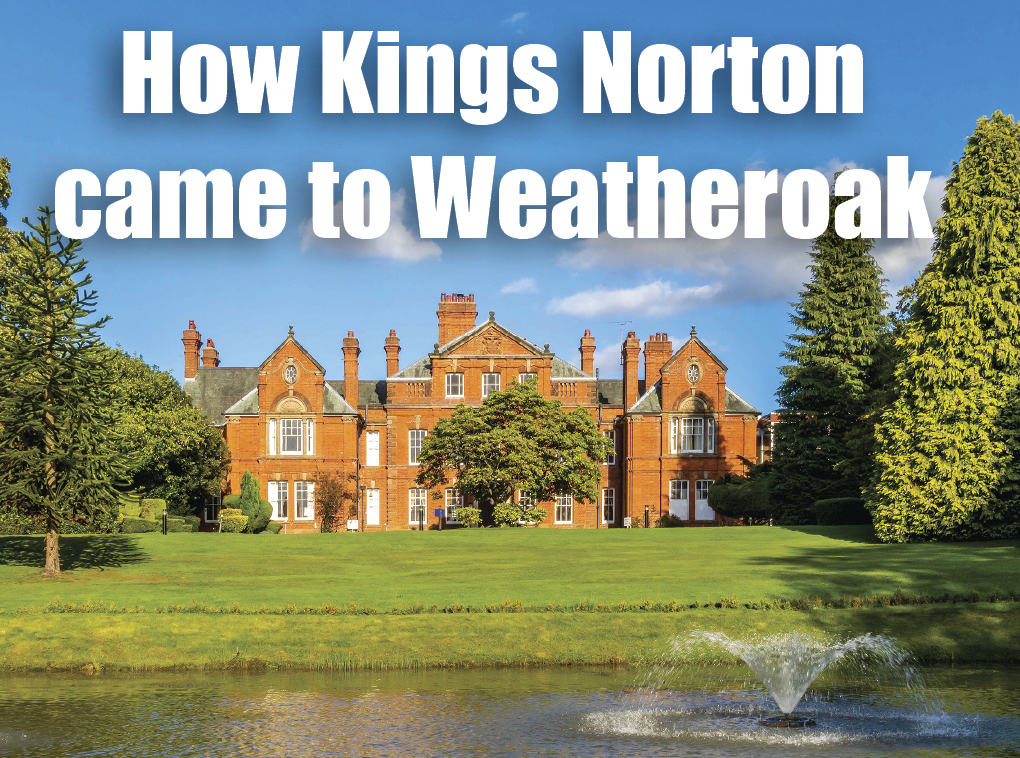 Richard Peach tees up the 50-year-old story of a city corporation hungry for housing land . . . and an exodus of golfers seeking a pastoral setting for their passion.

Golfers have now been thwacking balls around the fields surrounding Weatheroak Hall, on the edge of Alvechurch parish, for 50 years. And for all of those years, villagers have been asking: “Why on earth is it called Kings Norton Golf Club?” They are not a great distance apart in miles, but there is a world of a difference between the leafy, rural setting of the course’s grassy fairways, and the urban spread of Kings Norton.

That has not, however, always been the case – and the story behind this naming oddity tells us why we should always hold the Green Belt dear, and keep a very wary eye on Birmingham and its expansionary ambitions.

Back in the late 19th century, the village of Kings Norton was just that; a village, still far away from the dark, industrial goings on in Birmingham.

Meanwhile, the game of golf was enjoying its first boom as rubber-filled balls replaced the feather-filled affairs gentlefolk had been knocking around any suitable open spaces they could find in an effort to fill their time enjoyably and fashionably.

Better and cheaper balls to play with opened up the game to those who actually did something to earn a living: lawyers, industrialists, doctors and the like – although tradespeople could still forget it.

As a result, between 1880 and the start of the First World War, the number of golf courses in England soared from 12 to more than 1,000.

One of these new courses was created on fields at New House and Wychall farms, a little south of Kings Norton’s village green. The club’s formation on November 1 1892 meant it was pipped by a couple of weeks to being the oldest club in Birmingham, by a course created at another village on the outskirts of Birmingham, called Moseley.

The club grew along with the course in its rural setting and survived the effects of two world wars, the second of which led to nine of its 18 holes being ploughed to help in the effort to keep the people of Britain fed.

But while fairways could be reseeded and greens brought back to life, another post-war threat was looming ever larger and, quite literally, hoving into view.

Towering blocks of flats built by the mighty Birmingham Corporation were soon obscuring views from the fairways and there were complaints from club members of vandalism to the course by incoming residents to the council estates.

The arrival of the city may have made golfing at Kings Norton a little less of a pleasing experience to the professional people making up the membership, but it was not yet an existential threat.

That came a few years later as populations boomed in the 1960s and the corporation’s gaze fell on the golf club’s wide open spaces.

It isn’t known if there was any kind of invitation from a member or members at the club, perhaps aware of how much value they were sitting on and not keen on being surrounded by the city, but the spectre of compulsory purchase was soon to become a real offer of the enormous sum of £680,000.

In 1966 a stormy meeting of more than 200 members ended with a vote by a large majority to agree to the sale and to start looking for a new home.

It was a pressing search because the club would only have three years from agreeing the deal to playing their last shots at Kings Norton, although the inevitable protests in Kings Norton parish bought more time for the club while a public inquiry into the planned sale was called and held during 1967.

The inspector’s decision ruled against the whole thing and the people of Kings Norton breathed a sigh of relief, but the Government intervened and said it should go ahead because of Birmingham Corporation’s pressing need for housing land.

The parallels with 21st century fears of Birmingham’s housing needs translating into enormous developments in the Green Belt between Barnt Green and Alvechurch, sometimes dubbed “Barntchurch”, are stark.

Nothing, even village life, is safe when governments decide to help housebuilders take the easier option of building on green fields.

Back to the 1960s, where the golfers’ search for a new home was progressing in earnest – and they naturally looked south, away from the encroaching city.

We could have come to know it as Kings Norton Golf Club, in Barnt Green, but the land surrounding that village was considered “too hilly” by the club sub-committee leading the search.

They also checked out a site in Cofton Hackett, but this was thought to be too close to “the Austin”. Cosying up to a giant car factory was probably not going to be a popular idea for a golf club escaping the might of a city corporation.
Sites further south were discarded because they were judged to be too close to Redditch.

The golfers eventually settled on an early favourite: the 220 acres surrounding Weatheroak Hall, a late-18th century building that had been home to some grand families over the centuries, but was now owned by Bournville Village Trust.

The renowned golf course designer Fred Hawtree was hired to plan the innovative idea of three “loops” of nine holes each, effectively creating three different 18-hole courses depending on how two loops were combined.

As well as the course itself, there was the clubhouse to organise. Remarkably, there was a very strong move towards demolishing the magnificent hall and building anew: it was the 1960s, of course, and some of the best buildings in Birmingham had already been lost to the bulldozer and the flow of concrete.

It took two votes: in the first, 52 members voted to use the existing hall and 48 to build a brand new clubhouse. Undeterred, those wanting to build a new clubhouse managed to organise a second vote, which they lost by 85 to 41.

The lovely hall, which forms the backdrop for so many couples’ wedding photographs these days, was saved – although it is uncertain that Bromsgrove Rural District Council would have approved demolition, even if the club had voted to do it.

And then the work began, out on the course and to the rear of the hall where the members’ lounges and the grand ballroom were added on (as seen under construction behind the players about to tee off for the first time in the picture below) and are still in use today.

Out in the fields, all was going smoothly in the fantastic space available, although one less welcome characteristic of the land was making itself apparent: there was a lot of clay beneath the surface, which is the last thing you want when a golfer’s happiness is determined by the dryness of his or her feet and the feel of a firm surface beneath the ball.

This was highlighted in the final bill, with extra drainage work pushing up construction costs by £23,000 to £125,000.
And this wasn’t a one-off: as present members will know, this has continued to be something the club has invested vast sums on improving over the past 50 years in fine-tuning the land into what is now considered to be a golfing jewel.

Although it was still something of a rough diamond, and with only 18 of the 27 holes constructed, by the autumn of 1970 the new Kings Norton golf course was ready – and final rounds were played on the old course, in Kings Norton, on Saturday, October 31, 1970.

The following day, November 1, cheered on by a crowd of fellow members, a historic four-ball of leading lights of the club drove off from the first tee of the Red loop . . . Kings Norton had arrived in Alvechurch.

The official opening was held the following June, with leading professionals, amateurs and celebrities, such as boxer Henry Cooper, flying ace Douglas Bader and TV presenter Cliff Michelmore competing in a pro-am tournament.

The following year brought two Open champions to the club as Lee Trevino, who had won the Claret Jug only the week before, and his great friend, the 1951 Champion Golfer Max Faulkner, arrived for a pre-organised charity event.

Thousands of fans turned up to see “Supermex” Trevino shoot a three-under par 69 and then auction his golf shoes for charity on the 18th green, joking: “These are the ones I beat your Tony Jacklin in!”

Even though the course was still far from mature, it continued to host professional tournaments, with such big names as Jacklin, Tom Weiskopf and even a young Spaniard by the name of Severiano Ballesteros, until in 1976 the committee decided efforts should be concentrated on the club’s members.

Half a century later, the course has matured into a beauty, and is still surrounded by fields, with only the very occasional distant thrum of the M42 a reminder of the world continuing to change and move around it.

The club is thriving and has a waiting list for new members, who now come from all walks of life; from judges, to teachers to taxi drivers. They even let in journalists these days!

While the threat from Birmingham’s hunger for housing land remains real, the golfers of Kings Norton Golf Club shouldn’t need to start looking for another new home for a good many years yet, especially while there’s still 100 years left on the lease.
And perhaps by the time the next 50 years comes around, they might even feel sufficiently settled in to become Weatheroak Golf Club?

Much of the information for this feature and the historical pictures come from “The Road to Weatheroak”, written by golf writer and former Kings Norton committee stalwart Peter Ricketts for the club’s centenary in 1992.