Shadows of the Earth 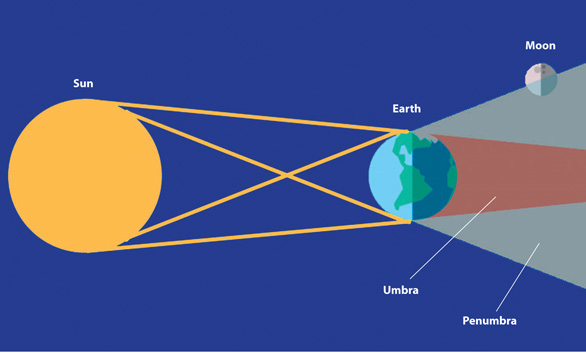 Another year has come and gone and we’re all a year older. Happy New Year. The good news is that although the Sun sets just after four in the afternoon on New Year’s Day, by the end of the month it’s nearly five o’clock before it disappears.

Venus is becoming more visible in the glow of the sunset now, rising a little higher each day before it, too, sets – just after six on the 1st but gone eight by the 31st. On the 28th, we get that wonderful spectacle of a thin crescent Moon close by, always worth looking out for.

Venus really is an odd planet, taking longer to rotate on its axis than it does to circle the Sun, so a year on Venus is shorter than a day! This also means the Sun rises in the east and sets in the west – but very slowly. Not that you could see the Sun from the surface, as it is covered in dense clouds which reflect most of the Sun’s light, making it the second brightest object in the night sky.

This means that the Moon is still partially illuminated so it won’t be anywhere near as dark as a full eclipse, but it should still be observable. Get out and have a look. It reaches maximum at ten past seven and is all over by nine, so try observing at these different times to compare the brightness.

People often point to the brightest star in the sky and ask me: “which one is that?”, and the brightest for the past few months has been Vega, so that has been a common answer leading people to accuse me of making things up. As if!

However, Vega is now getting low in the north-west sky, to be replaced by Capella which is getting higher over on the opposite side of the sky, in the north-east. It gets higher as the month wears on, being almost overhead later.

The Quadrantid meteor shower peaks on the 4th so look out for shooting stars around this date but please, not while you are walking along. I know of at least one person who has tumbled into a hedgerow in the darkness!

Those early sunsets also mean late sunrises too so early risers, like our wonderful posties, have a chance to glimpse Mars in the mornings at around half five. A good view of the south-eastern horizon is needed, though, as it will be very low and soon masked by the glare of the Sun. A crescent Moon is nearby on the 21st and the 22nd.