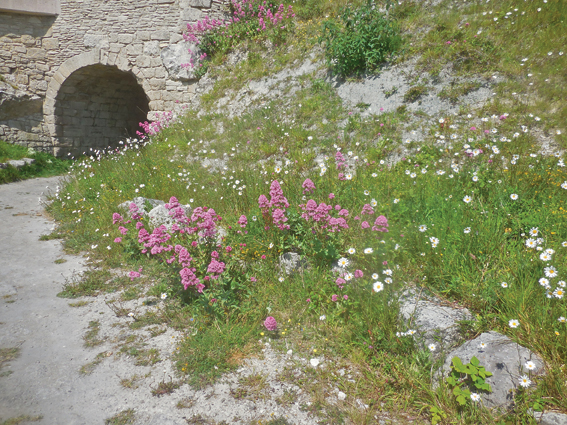 Mary Green explores an island with a thriving ecosystem.

I recently spent a week on a magical island, with amazing wildlife, spectacular views, clean beaches, a thriving community and free artworks. The sun shone and we could roam free. This was not in the Mediterranean or even the Hebrides, but the Isle of Portland in Dorset.

Most people have vaguely heard of Portland Bill, or an area in the Shipping Forecast, a prison, or the stone from which much of London is built. You may even know it was the centre for maritime sport in the 2012 Olympics. But not many people I have spoken to have been there.

For me, the most impressive thing was that people there have a care for their environment, so that it has a thriving ecology – as we all could. It’s at the end of Chesil Bank, so the sea-shore is protected. It is basically a huge rock which has been quarried for centuries.

Now that only a couple of quarries are still working, the old ones have been looked after by the Dorset Wildlife Trust and the local authorities, turning them back into a natural landscape full of flowers and butterflies.

The road sides are allowed to flower freely and not mowed to death, and the vegetation is managed only to make sure some garden shrubs don’t get too well established in the wild. We even had a picnic in the prison governor’s garden, which includes a wildflower patch.

There is a nationally important bird observatory, which gets the migratory birds before anywhere else. You can walk pretty well everywhere but there is also the Coastal Path around the island – and a good bus service!

One reason why there is a thriving community is that some quarries are still working, and a small amount of fishing, so families still live and work there and it hasn’t become just a tourist or retirement enclave. It has its own town council even though it isn’t a town but a collection of villages, tumbling down to the sea or perched on the heights.

One of the most spectacular places is the disused Tout Quarry, which has become a sculpture park. There are dozens of sculptures carved out of the remaining rocks, many hidden away down little tracks so you have to find them.

The sculptors range from Antony Gormley to young local artists to international visitors. The carvings are surrounded by wildflowers, insects and birds – and all free.

Quarries and other old industrial sites are often a better environment for wildlife than farmland. Here I saw some varieties of flowers that are rare elsewhere but profuse here.

There are also some species of flowers and butterflies that are specific to the area, like the Portland spurge and the Lulworth skipper.

Flowers ranged from the huge and stunningly blue viper’s bugloss and the uncommon yellow-wort, to the tiny eyebrights and milkworts that carpet the cliffs. There are coastal flowers that you will know from other seaside areas, especially red and white valerian everywhere.

We saw well over a hundred kinds of wildflowers in bloom. We found two kinds of orchids: bee orchids and pyramidal orchids. There were a lot of plants in the pea/clover family.

As well as the familiar bird’s foot trefoil, we found horseshoe vetch and kidney vetch, all attractive yellow flowers. Alongside red and white clover were haresfoot clover and hop trefoil, small but beautiful.

So, we saw the common blue, the rarer silver-studded blue, and the stunning Adonis blue which seemed to reflect the blue of the sky and the sea. And there were caterpillars everywhere: we got used to finding them crawling over us when we stopped for a picnic!

Another group of plants which attract insects well are the carrot family – the umbrella plants. Each head has dozens of tiny flowers, giving lots of accessible nectar.

Hogweed grew everywhere, and Alexanders which had flowered and set seed, but there was also abundant wild carrot. This has amazing shape-shifting flowers which move from convex to concave, and also change from pink to white, so a clump looks like a bunch of varied flowers.

The daisy family similarly have flower heads made up of tiny florets which attract bees and flies. There were moon daisies everywhere, as well as common daisies and sea asters, knapweed (the beautiful greater knapweed as well as the smaller one we get), Oxford ragwort, cats-ear and various hawkweeds and sowthistles.

One noticeable plant was yellow rattle, flowering everywhere, which some of you may know from places like Eades Meadow. It is parasitic on grass, so helps keep the balance and allow other flowers to flourish. There was another species of flower called broomrape, also parasitic, including the uncommon ivy broomrape.

Even on the shore itself there were flowers. Being almost entirely pebbly (no sand in your shoes!) they don’t have much seaweed, but above the tideline were rock samphire, ivy leaved toadflax (which also grew out of all the stone walls on the island, along with wallflowers which I haven’t seen actually on walls before!), restharrow, stonecrop, seablite, purslane, bindweed and sea wormwood.

Many of the plants we saw were old herbs, and two were much-used kitchen herbs – marjoram or oregano, which we picked from the roadsides, and thyme which we found on the cliffs – eaten in our evening meal!

There was a beautiful borage plant, those blue flowers that traditionally decorate Pimm’s cocktails. (Oddly enough I found one on a bank in Alvechurch recently, but it got mowed down.)

Add to this the sweet smells of honeysuckle and elder everywhere, and the roses (in the case the beautiful seaside burnet rose) and you have a great environment. You can’t see the careful hard work behind it, making sure everything thrives.

Birds were everywhere too, though not as many as you’d see in the winter and spring when the migrants come through. We walked several days with the sound of skylarks above all the time, and it made me remember how that used to be the case here until our farming methods drove them out.

There were stonechats, pipits and wheatears, buzzards, kestrels and a peregrine falcon. By the sea were black-backed and herring gulls, fulmars, cormorants, and in the Fleet lagoon by Chesil Bank were egrets as well as the famous swans.

The little museum on the island was founded by Dr Marie Stopes, the family planning pioneer, and includes accounts of how hard it was to get there before the bridge and causeway were built. It still has the feel of an island. It has a fascinating history.

You can walk on old railway lines and see the remarkable architecture of bridges and tunnels around the quarries. It’s such a good example of how care for wildlife can be built into a busy working community with some tourism – and the legacy of a little money from the 2012 Olympic Games!

Here we have finally had some fine warm weather and our Withybed Open Gardens had sunshine. Some people are a bit baffled by my garden, which has a lot of wild flowers that other people call weeds.

The garden is loosely based on Permaculture principles, including diverse plant layers, natural leaf mulching, minimal digging, composting, and no bare earth. As well as gardens, visitors could see species-rich grassland in the field they parked in and walked through, thanks to a local farmer with sustainable methods.

I have also been impressed by a relatively new orchard planted near Barnt Green which has hundreds of trees including local old apple varieties like Redditch Dobbin, and black Worcestershire pears.

It also has an emphasis on wildlife, with native plants growing freely around giving a habitat for insects, birds and mammals.

There are more and more people feeling their way towards improving the environment. If only our local authorities looked after our communal spaces better!

There have been lots of 50th anniversaries in Alvechurch lately, and it reminded me I had written this poem about ten years ago, when they were 40th anniversaries! You may recognise references to some Sixties songs.

What happened to those heavenly bodies
Who sang I’ve got my hair, got my teeth
Who were stardust and golden, watching the moon
Did we get back to the garden?
The bombers didn’t turn to butterflies.
I am walking up the field, my feet wet
Buzzards calling and wheeling over me
Butterflies on the thistles
Sun warming my bare arms.
Many of those bodies lie far away now
Some under the grass. Still got my hair.
We’ve all got more on our bellies
Love life and laughter have lined our faces
We have warmed ourselves
On each others’ heavenly bodies
Sometimes we bruised each other
Sometimes we made more bodies
Shooting stars across the skies.
Some of us were falling stars, and hit the earth.
I still believe that the touch of love
Will stop you ever wanting to make war.
When will they ever learn?

Train of the future takes a test run

Eating up the mountains