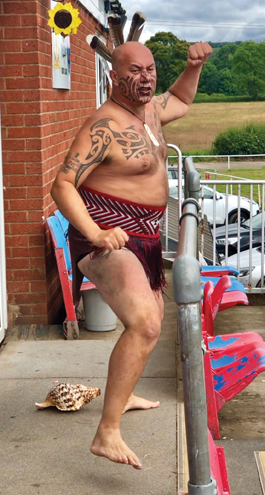 20 teams of pupils from Years 5 and 6 were involved in the annual event, held in honour of Kings Norton stalwart Chris Cooksey who passed away a year ago. This year the festival was based around the various countries contesting the Rugby World Cup, which begins next month in Japan.

The emphasis of the day was not on winning, but on the Rugby Union’s core values of teamwork, sportsmanship, respect, discipline and enjoyment. The Chris Cooksey Trophy was presented by Chris’s sons Gareth and Phil to the team who had best met these values during the tournament.

At the end of the tournament, all children who took part were awarded with commemorative medals. Prior to the event, each school had involved its pupils in projects about the country they were representing at the tournament and these were displayed in the clubhouse.

During the lunch break a surprise visit by a New Zealand Maori, Bruce Simpson, added to the excitement of the day. Bruce demonstrated the personal Haka of his Raukawa Ngati Toa tribe to the children, describing its Maori culture and history and teaching them how to do the Haka.

For more information about the club, visit https://www.pitchero.com/clubs/kingsnorton