Can you spot the bear? 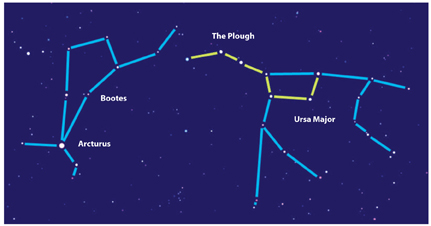 May, and it’s nearly ten thirty before the sky is really dark enough to see anything. A massive change from December when you had to put the lights on just after lunchtime!

We are seeing the last of Mars now because it has become so faint that by the time the sky is dark enough to see it, it is too low in the northwest. A very thin crescent Moon is close by on the 7th so this may give you chance to spot it. The other planets are all in hiding until after midnight.

Facing south, the big constellation of Leo is obvious, slightly right, with its brightest star, Regulus, sitting below the reversed question mark that is his head. High above Leo is the most famous of asterisms, the Plough.

I say asterism (with some difficulty) because this well-known collection of stars is in fact part of a much larger constellation called the Great Bear or Ursa Major.

If you take some time to stare this high in the sky, as your eyes adjust to the darkness (and your neck starts to stiffen) you should begin to see more stars appear to the right and below the saucepan, and if you imagine the handle to be the tail of the bear you should make out the vague shape of an animal.

I think it looks a bit more like a pussy cat but the ancient Greeks deemed it to be a bear so we’ll go with that. Not many people have ever bothered to actually look for this constellation so as you seek out a chiropractor to sort out that painful neck, console yourself with the thought that you are one of the few.

If you follow the curve of the bear’s tail down the sky to a more reasonable height, you will find the brightest star in the sky at the moment, Arcturus. This is the main star of the constellation Bootes, which is a sort of kite shape above it.

Now Bootes was a farmer in Greek mythology and a sort of kite shape looks nothing like your average cowhand, but if you follow the curve from the Plough through Arcturus further down, you reach another bright star.

This is Spica, sitting on the line in the sky drawn by the Sun, the ecliptic. To the right, towards Leo, is another star, Porrima (the Moon forms a line just to the right of them on the 14th).

Now if you imagine this pair to be Bootes’s feet, the true shape is revealed. The problem is, these latter two stars are nowadays deemed to be part of the constellation of Virgo, so Bootes must remain a severed torso.

So as you peer out at these shapes in the sky (as I’m sure you will), spare a thought for our half a farmer in the cosmos.