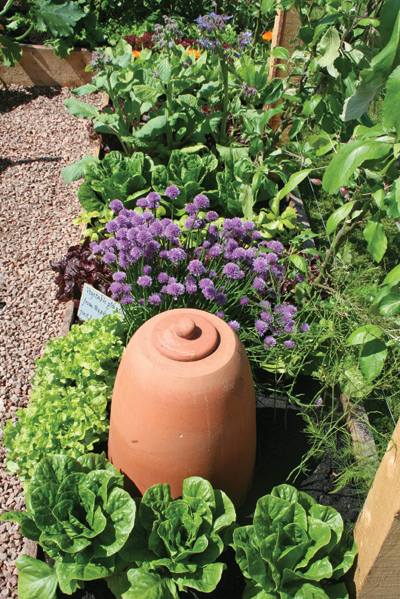 Hannah Genders explains how to get the best out of your veg, and looks forward to the Malvern Show.

I’ve been very busy in my veg garden; well, mine and a friend’s vegetable garden which I am helping to set up. He lives on a farm just outside Alvechurch village and has been struggling with the clay soil, so we are putting in some raised beds with good top soil and compost to be able to work the top eight inches of soil so plants can grow on well before they need to get their roots down into the clay below. I’m going to keep photos of this project and let you know how it develops this year.

In every garden, especially when growing veg, there is always a pest you have to deal with, and in mine it is field mice. They are extremely cute but very annoying as they eat any seed I put straight in the ground, especially peas and beans.

Once the seed has sprouted, they don’t seem to touch it, so I get around this by pre-growing all the plants in the greenhouse and then planting them out, covering them with fleece initially until the end of May when all the frost danger has passed.

I couldn’t bring myself to kill the mice, and I know they are such an important food for owls (along with voles) which we have a lot of around here. So, at one time I was catching them in a humane trap and cycling them up to the next village to let them go! The distance has to be over two miles away, evidently, because that is far enough for them not to come back.

I did wonder if the residents up there suddenly noticed an influx of mice! But in all honesty, as soon as I cleared a few, some more moved in, so the pre-grow method is much more effective.

I put my organic pellets under an upturned flower pot with just enough room for the slugs to crawl underneath; this keeps them longer as they don’t get rained on and seems to catch the slugs really well. I also have a hedgehog who quite regularly comes and turns over the pots and eats up what is left underneath, and thankfully I know she is perfectly safe doing so.

The hedging bags come from a company I use who grow mature hedges, and they are perfect for using in the greenhouse as they have a good depth to them. I fill them with my homemade compost and some soil mixed in. This gives the plants some nutrients and some water holding capacity during the hot summer months.

Once I have dug out my bean plants, I will top up the soil content and plant my tomatoes and chillies out in these. When planting out I use pea sticks – just cut the branches off a shrub such as hazel, and push them into the ground alongside the bean or pea plants to give them some support. I also add about a tablespoon of organic feed such as blood, fish and bone when I plant just to give them an extra nutrient boost.

These plants are going into a bed that was manured in the autumn and this is what they need. If you can get the broad beans going early enough, they crop early, and you don’t usually have as much problem with black fly which can be a bit of a menace in June.

I’m growing a fairly standard variety of broad bean this year, although I must say I love the red-flowered heritage variety but I didn’t order the seed in time. I grow mangetout instead of peas as I just find them much easier and less fiddly. Again, these need plenty of well-rotted manure or compost to grow into and you will get a massive yield from them.

I love growing salad crops as they are very easy and tasty. I have kept a crop of rocket growing for most of the winter in the greenhouse, just cutting off the tops every time it regrows and eating them.

This is also true for perpetual spinach, which is in the garden, not the greenhouse. It really does keep coming back, and with both crops you can avoid having to buy them in supermarkets in the dreaded plastic bags. Either of these plants could be grown in a pot or window box so have a go, and with the extra taste I’m sure you’ll be hooked.

The other reason May is so busy for me is that it’s the RHS Malvern Spring Festival from May 9–12. We are doing a feature called Eco, Green and Growing, or EGG. If you are coming to the show, please drop in and say hello. We have a rolling programme of talks, interviews, demos and live music. This is the link for us: https://www.rhsmalvern.co.uk/whats-on/grow/

Previous article
Can you spot the bear?
Next article
Under the spreading chestnut tree

Add sparkle to your wedding!