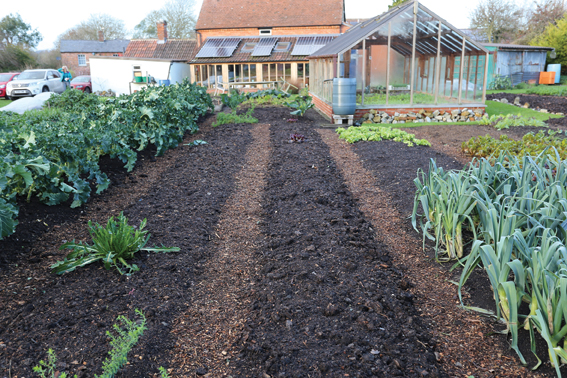 Hannah Genders peers into the future of gardening.

I know, I know, it sounds too good to be true! But bear with me because I think it is the future of gardening for a number of reasons.

I first came across no-dig gardening, or minimal dig gardening if you prefer, in 2006 when we were filming for a programme on allotments. The aim of the programme was to find the most sustainable, eco-friendly allotment in the UK.

The couple who had set up a no-dig allotment really did seem to be doing much less work and producing fabulous crops. It made me use mulch much more and consider how I gardened, but at that point I didn’t take it wholeheartedly onboard.

The idea of protecting the soil surface rather than constantly exposing it to the elements is a permaculture method. Permaculture in its simplest form, both in agriculture and gardening, is to develop ecosystems that are self-sustaining, and work with nature to improve the planet, not work against it.

When we look worldwide at the frightening way we are losing soil – a report in 2017 quoted the figure of 24 billion tonnes of fertile soil being lost per year through intensive farming – clearly something needs to change.

So, with a no-dig method, the idea is to protect the surface of the soil as the most valuable and most fertile part of the garden. This is done by mulching the soil with well-rotted compost which is laid on and not dug in. This top part of the soil is then planted up with as little disturbance as possible. It becomes incredibly fertile, not only with massively increased worm activity but also with mycorrhizal fungi, which we now know are vital for plant growth.

This whole subject is something very close to my heart, and an area I want to learn more about for myself and for a new vegetable garden I am setting up, but it is also the subject I want to promote at this year’s RHS Malvern Spring Festival (more about this later).

With this in mind, I made a trip in November last year to meet the guru of no-dig gardening, Charles Dowding. Many of you may already follow Charles on his YouTube channel or his online teaching videos, which are excellent. He regularly gets tens of thousands of viewers to his well-informed gardening films.

Charles is a market gardener and has been practicing no-dig, organic gardening since 1982 on several different soils. In total, he now works around a quarter of an acre of intensive, organic growing at his garden, “Homeacres”, in Somerset.

When I visited in November there were still plenty of vegetables in production and it looked amazing, mainly brassicas outside along with neat rows of salad crops in the polytunnel. Since 2003 Charles has also developed a method to produce continuous-cropping salad. The compost area is vitally important to this method of gardening and it was neat and well-maintained.

Charles admitted he does buy in some mushroom compost as he literally cannot produce enough compost for his garden each year. Each autumn he will mulch all the beds with compost, and what interested me was that he only adds around one inch of mulch. The beds have now become so fertile and aerated that they don’t need lots of mulch to keep them producing well.

There are no edges to the beds in most of the Homeacres garden, but each growing area stands proud of the paths due to the mulch being added year on year. Evidently wooden edging can encourage slugs and snails.

No-dig gardening also produces fewer weeds (which really does seem too good to be true). The first reason for this is that the organic matter lying on the surface as a mulch acts as a weed suppressant. Secondly, the soil does not need to “recover” after being dug and disturbed – soil recovers itself by producing weeds and covering itself up again.

Thirdly, as the soil is not disturbed, the seeds in the soil are not exposed to light and therefore much less likely to germinate. Hoeing the surface off is the main task in keeping weeds at bay and this needs to be done regularly.

The beds in Charles’ garden are long and thin, allowing each side to be reached without treading on the soil and therefore keeping it aerated and not compacting it, the same as any raised bed system. The new plants are pre-grown in the polytunnel as he has a problem with mice; this is something I have done in my current garden for the same reason and I know it works well.

These small plug plants are then planted directly into this top fertile surface at the right time of year and romp away. Keeping the ground mulched like this also helps keep moisture and warmth in on any soil.

As I mentioned before, I want to demonstrate and promote this method of growing in the feature I run at The RHS Malvern Spring Festival. My feature is called The EGG (Eco, Green and Growing) and the plan is to have talks and plenty of opportunity for learning and asking questions.

I feel very honoured to say that Charles Dowding is joining us on the first day of the show to do just that – unfortunately he can only do one day, so his partner Stephanie will take over for the rest of the weekend.

Stephanie is also a no-dig gardener and food writer, specialising in plant-based recipes which can be grown on the allotment. She has run kitchen gardens on private estates and restaurants, worked in no dig market gardens for 11 years. Stephanie also uses homegrown and foraged plants to make natural products for home, body and garden.

She speaks widely on these subjects (including at RHS Wisley and BBC Gardeners’ World Live), has written several books and writes for national publications including Kitchen Garden Magazine. Her blog is: https://www.NoDigHome.com

At The EGG we are also promoting community projects, both inner-city and rural, and this year for the first time in any RHS flower show they have made the area I am in plastic-free. (Well, Glastonbury did it!). Come and see us and learn from the experts.The RHS Malvern Spring Festival runs from May 7–10: learn more at https://www.rhsmalvern.co.uk

Charles has a very informative website (https://www.charlesdowding.co.uk) and regular programmes on YouTube (‘Charles Dowding’). He and Stephanie also run courses at Homeacres.

Previous articleVenus catches us up
Next articleWhat can I do for biodiversity?