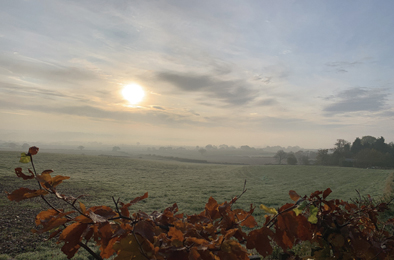 November started quite wet but also mild, and very overcast with little sunshine in the first week. The second week became a little colder with night frosts but also a lot more rain, leading to local flooding.

The cause of these changes was due to the jet stream in the Atlantic dropping further south at times, introducing colder but very changeable weather.

The second half of the month turned much colder with some frosts, but also some grey, overcast and quite chilly November days.

There was a chilly start to October with ground frosts on the 2nd and 3rd. The weather then turned milder and quite changeable, with a further shift to colder anticyclonic weather towards the end of the month.

Rainfall was around normal until a period of heavier rain on the 25th and 26th; a combined fall of 32.2mm in 36 hours with local flooding.

Outlook
As the month changes we’ll see some settled weather in the east with rain, strong winds and possibly gales continuing in the west. Through early December confidence remains very low but there could be a period of more settled weather across much of the UK.

This will bring drier conditions for many but there will be a chance of frost and fog developing for many areas through the night. Temperatures look to be around average for the time of year.

Previous articleA wildlife year
Next articleHow much is enough?