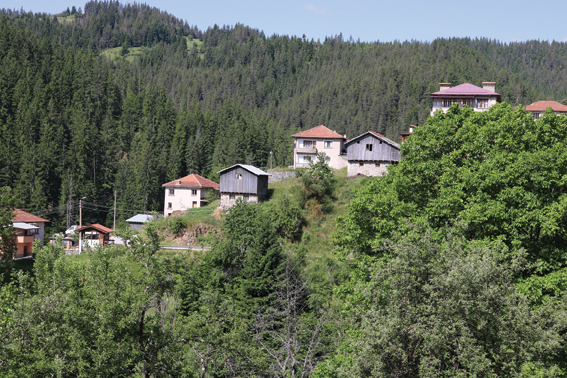 Hannah Genders takes a trip to the mountains.

This article starts with a love story: our great friend Sue, who lives in Alvechurch, recently met and married Roger. Everyone who knows them is thrilled for them, and their wedding was featured in The Village in 2018. And with Roger came, for Sue, not only a love of gardening and flowers, but a house in Southern Bulgaria.

Roger had been saying to me for the past year that he wanted me to see the wildflowers in Bulgaria, knowing I would love them. So in June this year we had a treat – we went to stay in Roger’s house in the Rhodope mountains which border Greece in the south of the country. The house is at four thousand feet (the height of Ben Nevis) with views out to the surrounding mountains – they are very green mountains due to the woodlands that cover them.

The sloped valleys around the house and all over this area of Bulgaria are laid out to hay meadows with a few vegetable gardens dotted in between. The farming history of the area is traditional hay meadows grazed by cows, with the milk used for local cheese and yogurt.

Bulgaria is a poor country that has not been able to afford pesticides, so the meadows have built up a fantastic matrix of flowers and, with the flowers, bees and butterflies in numbers I don’t think I’ve seen since I was young. When walking through a woodland you would come across a puddle with 20 or 30 butterflies drinking, not just one or two as we are now more used to seeing in the UK.

The mountains have lots of wildlife, birds of prey and brown bears! The warning signs about the bears say you should lie down and be quiet if you come across them, but as the locals say, “We just laugh at these signs; who is going to lie down in front of bear?”

Let me tell you about the wildflowers. There are whole fields of orchids, mainly common and pyramid orchids at the time of year we went but listed in the guidebooks for the area are many, many more. I tend to do wildflower identification by knowing the cottage garden perennial and then working out what the wild version is.

Wild geraniums, geums and blue-flowered anchusa were all in flower in June and as you walked out of Roger’s house in the mornings the air was alive with bees and insects buzzing. The landscape is managed very sustainably with the hay being cut in late June and September after the flowers have seeded down.

The lifestyle is very idyllic but there is a sadness to the story too, as the younger generation have left the rural villages and moved into the cities or further afield into Europe to look for work. Bulgaria is currently the fastest-depleting population in the whole of Europe, so the villages are largely dying out, it’s still a poor country and although now in the EU, it retains its own currency.

The climate and soils seem ideal for growing food as well as wildflowers – potatoes, beans, and strawberries were all growing in the village we stayed in. The management of the meadows depends on the grazing and milk production continuing in the same way, and it looks as if this will finish when the current generation have died or left. The local milk farmer to Roger’s house had just finished the year before, being unable to survive on the low price that he was being paid for the milk – a bottle of water is more expensive.

And yet you can see with just a small raise in living standards, it is a beautiful place to live and a very healthy place. A report in 2016 showed the Rhodope Mountains to be home to the highest percentage of centenarians not only in Bulgaria, but worldwide. It goes on to state that the mixture of a healthy diet, especially the yogurt, the cleanest air in the whole of Bulgaria and a low-stress lifestyle are all contributing factors. Really, what’s not to love?

We spent a week out there and did many walks in the surrounding countryside. If you are tempted to visit, I would also recommend the second city, which is called Plovdiv and well worth going to see. It is ancient with cobbled streets, Roman amphitheatres and aqueducts, and this year it is the European city of culture, so there is loads going on.

Previous articleHope restored with win
Next article50 years in the saddle