50 years in the saddle 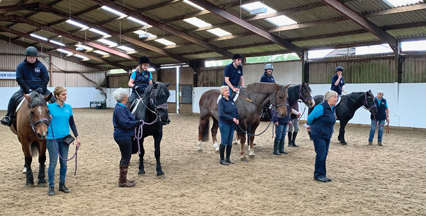 The Riding for the Disabled group based at Seechem Equestrian Centre in Rowney Green celebrated its 50-year anniversary with a special event for riders and their carers, organisers and volunteers past and present.

The RDA itself is also reaching its 50th anniversary, and the Seechem group was one of the first to be set up. Originally held in fields belonging to the first organiser, Jean Scott, it moved to Seechem in 1969 and has flourished there ever since. The group is very grateful for the support and help that Seechem Equestrian Centre provides.

During the afternoon, riders from the Cerebral Palsy Midlands group demonstrated a drill ride to music, while the Mixed group performed a Countryside Challenge ride, where they were asked to post letters, pick apples from trees, open gates and deal with typical hazards found while out on a ride. This was followed by a tea party for all.

Volunteer helpers are always welcome; there is currently a waiting list for new riders but anyone interested in either should go to one of the weekly, term-time sessions on Thursdays at 1pm, at Seechem Equestrian Centre, Rowney Green B48 7EL.

Previous articleWildflowers of Bulgaria
Next articleThe other harvests