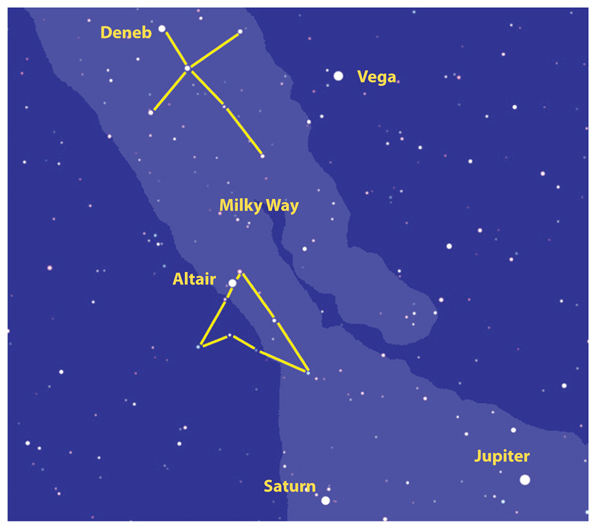 October, and we know winter is on the way as the nights start earlier and the temperatures tend to drop. We still just about have Jupiter in our skies, probably being the first object you can see as soon as the Sun is gone.

Look for it just to the left of the glow of the sunset from just after 7pm; it’s not very high but should be obvious, being so bright. It will be gone by about half past eight. A very thin crescent Moon is close by on the 3rd, making quite a spectacle.

Saturn is with us too, although being nearly twice as far away as the giant planet, is not so bright but still quite clear. Look for it from about 7:30, to the left of Jupiter, practically in the south. It sets much later and you should be able to see it till about ten. The Moon is just below it on the 5th and being at first quarter (when we see half a Moon), should again make a splendid sight.

When the sky is properly dark, about eight o’clock or so, above Saturn and a bit more than twice as high you should find quite a bright star, Altair. This is one of the nearest stars in the sky although its light has still taken more than sixteen years to get here.

It sits at the top of a faint triangle of stars making up the constellation of Aquila, the Eagle. This isn’t very distinct so you may have to allow a little time to pick it out.

Now, looking in the same direction, find a really bright star high in the sky, nearly overhead. This is the famous Vega, one of the brightest stars in the sky. It too, is relatively close, being a mere twenty-five light years away.

It is a very hot, young star, thought to be one tenth the age of our Sun. It is also spinning round very quickly, so quickly in fact that if it were to spin even slightly faster it would tear itself apart. Let’s hope it calms down with age!

Left from Vega, at a similar height, is a third bright star, Deneb. This star is one of the most distant you can see at around two and a half thousand light years away, so it must be very big indeed – and indeed, it has been calculated to be about a hundred times the size of our Sun. It sits at the top of a cross of stars making up Cygnus, the Swan. This is easier to spot than Aquila.

At this point you need to find the dark heart of Alvechurch – no, not the pub at the boatyard but somewhere with as little light pollution as possible. This should enable you to see a misty patch running down the sky through Cygnus.

This is the light from the billions of stars that make up our own galaxy and you can see how it got the name, the Milky Way, with its very centre just below Cygnus.

Look for it next time you’re out in the dark and don’t forget to keep an eye out for the Orionids. No, not there – it’s a meteor shower that peaks on the 22nd. Happy sky-watching.