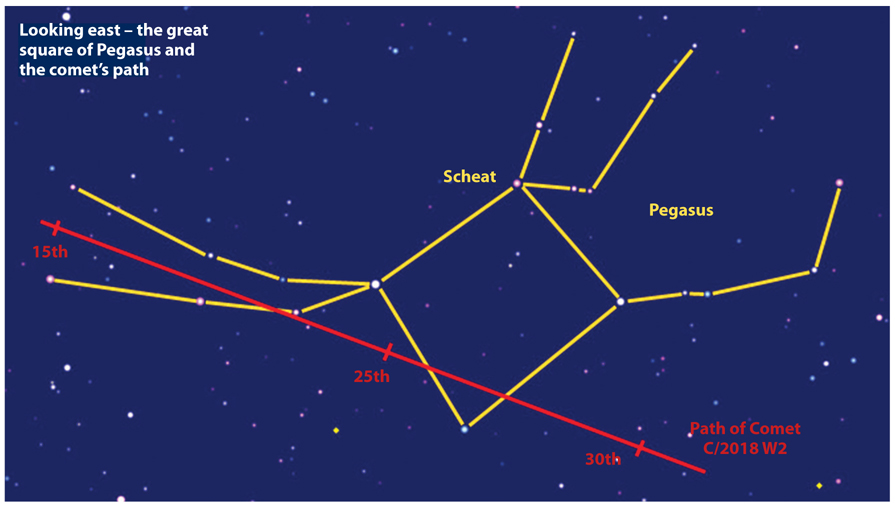 September, the month of the equinox – which is on the 23rd at 0850, to be precise – and of lengthening nights with sunset coming as early as ten to seven by the end of the month.

What can we see in these ever-darkening evenings? Well, soon after sunset, Jupiter is still there, low in the southwest and only hanging around for a couple of hours before it follows the Sun over the horizon.

Saturn is visible to the left, due south at a similar elevation to Jupiter. Being farther east, it doesn’t set until after bedtime. The Moon comes cruising by on the 5th, passing Saturn on the 8th.

As the sky gets darker, right over in the west, a little higher than Jupiter is the brightest star in the sky at the moment, Arcturus. It sits at the bottom of a kite-shaped constellation named Bootees. Indeed, this star is so bright that its light was used to help open the Chicago World’s Fair in 1933!

It is just about one and a half times bigger than our Sun but one hundred times brighter and is considered to be a red giant. It will one day blow away its outer layers and recede into a white dwarf. That’ll teach it!

Now, turning 90 degrees leftward, looking south above Saturn, you should find another bright star sitting at the top of an inverted triangle of stars. This is Altair and the constellation is Aquila, the Eagle.

This is the nearest star you can see although it has still taken 17 years for the light you are seeing to have reached us here in Alvechurch. Well, I suppose we are a little out of the way.

Turning 90 degrees again, you should spot a square of stars, although it’s a bit tipped over and looking more like a diamond at the moment. This is the great square of Pegasus with its brightest star at the top.

Named Scheat, it is a red giant about two hundred light years away and it actually pulses, getting bigger and smaller over about 43 days, shedding gas and dust out into space as it does so. It too, will one day go supernova.

Now, why have I brought you over to this part of the sky? Well, during September, a comet slides across the bottom corner of Pegasus, brightening as it does so, reaching peak brightness on the 25th.

I know comets are very unreliable and usually fail but it may be worth a look, especially through binoculars or a telescope – but be aware that it will only appear as a fuzzy blob.

Those beautiful pictures you see are taken with a long exposure or nowadays lots of short exposures added together. This comet has the intriguing name of C/2018 W2 (Africano) but I’ve no idea why.

Also on the 25th is a launch of a crew to the ISS in a Soyuz spacecraft. You will need to check https://www.heavens-above.com to see if there is any possibility of it being visible to us.

A little earlier in the month, on the 10th, the Japanese will launch an HTV Cargo Vessel to take new supplies to the Space Station. So a lot to look forward to despite the shortening days.

Previous article
Flowers for the future
Next article
Onwards and upwards