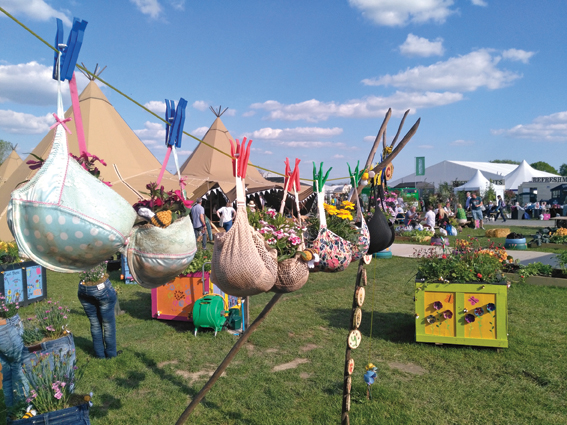 Hannah Genders reports on her latest feature at the Malvern Show.

We’ve just finished another fantastic weekend at the RHS Malvern Spring Festival. This is my third year of doing a feature for the show under the title “EGG”, which stands for Eco, Green and Growing. The area is like a mini festival within the festival and we promote any individuals or groups who are involved with community projects or working in a way that promotes all things Eco, Green or Growing.

This year we had the farming sisters with us again, Amy Bates and Sophie Hamilton, who have gone back to run their family farm near Alcester. They were both teachers and are now running the farm as a forest school farm, so the children get to experience a working farm and learn where their food comes from.

It is also a Higher Stewardship farm so is all about creating wildlife habitats, sowing crops with birds and bees in mind and enhancing native woodlands and hedgerows. They created a fabulous display at the front of our stand with a vintage tractor and trailer to promote Sophie’s other business, which is flowers from the farm, using only British-grown, seasonal flowers.

New this year we had the Malvern Repair Café. I was so impressed with this idea and how it is executed; basically you take anything you need repairing to the café they have set up and sit and have a coffee while this wonderful bunch of retired people with an amazing set of skills repair whatever you have brought in.

They tell us they can repair 80 percent of all the things that are brought into them, from sewing repairs to sharpening tools to iPads and mobile phones. It was just such a joy to have them at the EGG telling people about what they are doing and encouraging all of us not to throw things away but get them repaired.

The other main feature we had at the front of our EGG tepee was Allens Cross eco project, which is based in Northfield, Birmingham. This urban garden project means a lot to the people who use it. They recycle everything, and this year created a display made from old pallets that looked great planted up with herbs.

Jackie Careless, who runs the project, always likes to have fun with what she brings to the show and this time was no exception, from her “hanging braskets” (second-hand bras on a washing line planted with flowers), which I understand made it on to Gardeners’ World, to stuffed and planted old jeans. It had lots of people coming and looking, taking photos and at the same time learning all about the work that Jackie and her team do.

Their theme this year was planting to promote pollinators and they had a natural bee hive at the show with lots of knitted bees around the stand too. All our exhibitors had the chance to come on the stage in the tepee and tell the audience about their project – while Jackie was talking, two of her service users spoke about what this garden means to them in their daily life and I was choked up listening at the back of the tent; these small urban gardens are vital to the people who use them.

I know I haven’t spoken much about plants yet – all the speakers on our stage were gardeners, but talking about gardens from an ecological, green or environmental point of view. We had a climate change scientist too and for all the talks the tent was packed; there seems to be a real hunger in people to know more on these subjects.

I have to say our plot felt like a haven after the busyness of the retail areas and the show gardens. We also had, between the talks, lots of music, provided by my husband Mike, Ally Craigan who is an excellent fiddle player and lots of people they know. The Sunday afternoon was just a full-on music session for several hours.

At the front of our feature on either side of the path were planted vegetable beds, grown for Chelsea by Jon Wheatley. These are all being redistributed to Jackie and her project and a new Incredible Edibles project starting up in Alvechurch, which I hope to tell you more about in future articles.

So let me give you some feedback from the ecologist. A question was asked: “What is the one thing I can do to help wildlife in my garden?”. The answer was to plant a tree – even a small garden can take a small tree and if you can plant a semi-native tree so much the better, something like Crataegus laevigata ‘Paul’s Scarlet’ which is a hawthorn, grown as a tree but with gorgeous deep pink double flowers (good for bees) and autumn hips (good for the birds).

The other questions that came up time and again were about flowers that were good for wildlife – and as we were promoting plants for pollinators, we could send them outside to have a look. One of my favourites that the farming sisters had brought along was Phacelia tanacetifolia, sometimes called Lacy Phacelia.

It is grown as an annual and has these amazing curled flowers almost like a fern. It likes sun and is loved by bees and all pollinators; easy to grow from seed, it is definitely one for your garden this summer.

Thank you to all the EGG volunteers and helpers.

Previous articleChaos in the heavens
Next articleGardens open for charity