Warming up after chill 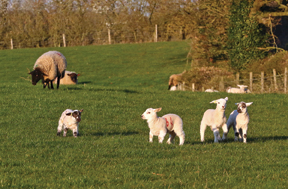 April reversed the warming trend of the past couple of months. Both daytime and overnight temperatures were well below what is expected at this time of year.

Rainfall was also slightly below average, the one exception being the 4th with 12.5mm of rain over a short period – nearly half the rainfall for the month thus far. Temperatures were climbing as we headed towards Easter, but were then due to turn changeable.

March was a month of two halves. The first 18 days were very wet with the entire month’s rainfall of 68.5mm. This was then followed by 13 days with no rainfall. This same period gave about 70% of the month’s sunshine. Again, the mean temperature was warmer than the local mean by 1.8 C.

During the first half of May, there is a slightly greater chance of some longer dry spells, but also brief, more changeable interludes. Temperatures will probably be near or slightly above average. However, as is usual at this time of year, there will be some marked variations through the period.