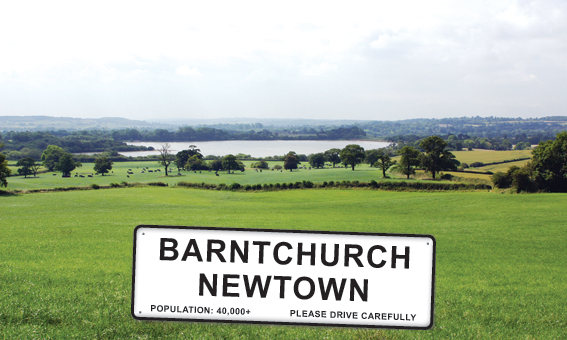 The Green Belt around Alvechurch and Barnt Green is under threat – again. This time, it could be really serious . . .

Three times now, over the past 20 years, this magazine has carried a stark front cover warning of the threat to our Green Belt.

On the first two occasions, the proposed building sites in question were eventually built upon, despite strong protests from villagers.

This time, the scale of what is being outlined is so enormous we can only hope it is not a deal already stitched up in some distant tower of power and now being let out only gradually to keep a lid on public outcry.

For now, we are told the ideas contained within the Greater Birmingham Housing Market Area Strategic Growth Study are just that: a desk-based brainstorming session into how Birmingham’s housing pressure could blow out into the surrounding countryside.

The 276-page study, supported by a 302-page appendix, concludes that on top of all the housing already in the pipeline and all that is likely to be added to that pipeline, the “housing market area” of “Greater Birmingham” will still need another 60,000 homes by 2036.

One way of finding land for these homes, it says, is to create four “new settlements” around Birmingham, each adding 10,000 to 15,000 new homes.

One of the four suggested locations for a new settlement, “planned on garden town/village principles” is in the Green Belt along the rail corridor between Barnt Green and Alvechurch.

There is no precise location identified (although see ”What We Know” on Page 6), but the study suggests a new town would incorporate “an existing settlement as its starting point, particularly where this is focused on a railway station”.

This is what leads to the idea that the proposal would be for Barnt Green and Alvechurch, both of which have the requisite stations, to coalesce into one large town with 10,000-15,000 new homes built in the Green Belt between them.

This would be the end of village life as we know it.

To put this into perspective, Barntchurch would dwarf our present market town of Bromsgrove, with its population of little more than 30,000.

The study, commissioned by the local authorities within “Greater Birmingham”, was led by GL Hearn, a “real estate consultancy”. Part of the outsourcing giant Capita plc, it says on its website that its “skills are very focused on enabling project delivery” and it has been “privileged to help deliver some of the most exciting projects across the UK”. These are people who like to see developments “delivered”.

The study sets out its stall, saying it will ignore the housing supply figures provided by local planning authorities, in our case Bromsgrove District Council, as, in the consultants’ opinion, these “should be treated with a significant ‘health warning’”.

It then embarks on an epic analysis of the region, employing impenetrable planning-speak, while every now and then offering a morsel in understandable English of how this might affect people, here in the real world.

From a distance, attention to detail is not always possible. For example, the study states that Alvechurch railway station is at the Red Lion, in the centre of the village – an easy error to make if you are relying on Google Maps, which shows a “station” symbol at the pub, presumably because that is where the train-replacement buses stop.

While this may be a minor detail to someone drafting a study at their desk in London, or wherever, it is of great concern to the people who live here if the location of a railway station – “1km” from the new town – is the fulcrum upon which the whole grand design turns.

Meanwhile, our local planning chiefs want us to hold our fire until June, when Bromsgrove’s latest district plan is expected to begin its consultation period.

At the moment, they say they have no opinion on the study, only that councillors should consider it “a thorough evidence base to take matters forward through the district plan review process”.

Independent councillors at Bromsgrove have pushed for an emergency debate on a motion that this study should be set aside completely and that the district continue its local plan deliberations as if it did not exist.

This request was not granted, although it looks like the independents’ motion will now be debated at the next full council meeting.

We don’t yet know how this will play out, but with district council elections only a year away, we will be following the positions taken by our readers’ representatives closely so we will know whether or not we should be supporting them at the ballot box in May 2019.

Meanwhile, there has been not a peep from our MP, Sajid Javid, who recently had “Housing” added to his portfolio as Secretary of State for Communities and Local Government.

That skill-set should surely put him in the best possible position to help his constituents.

By the time of the next General Election in 2022 we will know if the Barntchurch idea has wings and whose side  our MP is on . . . although as Cofton, Barnt Green, Hopwood and Alvechurch are set to be scythed from his constituency and lumped into Redditch by then, those villages may be of little concern.

For now, we should not be lulled into the sense that this is something in the distant future that we do not need to consider seriously right now.

The consultants’ study says the lead-in time to organise Government money and infrastructure for new settlements such as Barntchurch is around ten years. To build a new town must take around five years, at least.

The arithmetic is simple: this decision will probably have to be made in the next two years, if not sooner.

Too often we have seen ideas about what might, possibly, happen 15 years hence come to fruition in our green fields as they are filled with bricks, mortar and driveways.

We hope our readers agree that waiting until June to stand up against this idea is not an option.

We do not want to see this magazine renamed “The Newtown”.

To read the study for yourself, visit https://www.bromsgrove.gov.uk/GBBCHMAstudy.aspx

Previous articleBarntchurch: What do we know?
Next articleMP responds to Green Belt threat