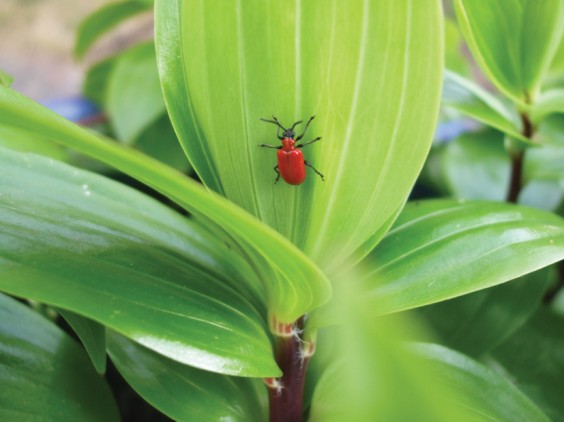 The image above is of the Red Lily Beetle (Lilioceris lilii) taken in my back garden in Cofton Hackett. If any reader has outdoor lilies then they should regularly check them for signs of defoliation – this pest will strip lilies and fritillaries bare.

The beetle is quite noticeable by its bright red appearance but, on sensing danger, cleverly drops on to its back on the soil, becoming difficult to spot, so you may need to be a bit sneaky and catch it on a white surface as it drops.

As it has no predator, this bug has swept unchecked across the country and the only way to effectively deal with it is either by pesticide (and risk killing everything else) or, my preferred option, by squashing it between finger and thumb.

The lily beetle is at its most damaging in the larval phase. Hundreds of larvae may hatch at one time, and they begin eating immediately.

Though the leaves are their preferred food, they will also devour buds, flowers and stems. Most feeding takes place under the leaves or at leaf nodes along the stem.

The larvae are bright orange and would be relatively easy to spot if they didn’t have such an effective and disgusting way of disguising themselves: as the larvae eat, they pile their excrement on top of themselves.

This makes the larvae difficult to see (look for soft, brown masses), difficult to destroy (squishing the mass doesn’t necessarily kill the larvae) and very unpleasant to touch (some gardeners wear rubber gloves).

The larvae typically feed for 16 to 24 days and then enter the soil to pupate. Adult beetles will emerge 16 to 22 days later and continue feeding until autumn.