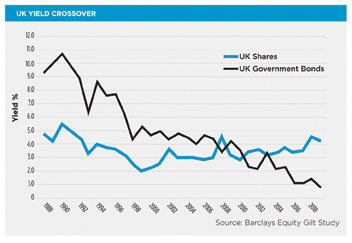 Martin Pryor explains where you can find value in today’s investment markets.

These are strange times in the investment markets. The looking-glass world of negative interest rates – where borrowers are rewarded for taking out loans and savers pay interest – has become a reality in parts of continental Europe and Japan.

In the UK, the Bank of England base rate has been below 1% for more than a decade. In the US, the central bank started cutting rates from a peak of just 2.25%–2.50%, set last December. The idea that interest rates would be “lower for longer” is edging towards “lower forever”.

Fixed interest securities (bonds) have also come under the spell of negative interest rates. At the time of writing, there were about $11.4tn of bonds, mostly government paper, offering a negative return to those investors who held them through to maturity.

There was a time when an investor in bonds would look forward to a return on their capital (i.e. interest); now some cannot even expect a return of their capital.

The decline in interest rates and bond yields since the 2007/08 financial crisis has overturned some traditional relationships in investment markets. For instance, it was once the case that the longer the term of a bond, the higher the interest rate. In many countries, such as the UK, US and much of the Eurozone, the return on a 10-year government bond is now lower than the central bank’s short-term interest rate.

Another example of a norm that has been overturned is the difference in immediate income available from bonds and shares. It used to be that government bonds provided a higher income than shares because the latter offered the possibility of growth, not only of income but also capital value.

The graph above shows the historic yield advantage of bonds in the UK up until the time of the financial crash.

Since then, the picture has changed with a marked widening in the last few years of an income yield gap favouring shares over bonds. Ten-year UK government bonds currently have a yield of under 0.8%, while the average dividend yield on UK shares is over 4.3%.

There have been similar reversals in many other world markets. Even in the US, where interest rates are relatively high, the average share yield was 1.85% in mid-November compared with 1.88% for a 10-year government bond. But the average figure can itself hide a significant difference between individual shares, as is often the case.

l  Value shares generally have a higher than average yield, but relatively limited growth prospects. A typical example would be a utility company.

l  Growth shares are expected to see earnings grow faster than the norm and thus carry a relatively higher than average rating (and lower yield). The classic example would be a technology company.

In the past three years, value shares and the funds that favour them underperformed growth shares on a global basis, despite the higher dividends on offer. However, as the global economy shows increasing signs of slowing down, there could be an argument for taking a second look at the value sector. Many funds target value investing, although it is important to select the right ones.

The value of your investment can go down as well as up and you may not get back the full amount you invested.

Investing in shares should be regarded as a long-term investment and should fit in with your overall attitude to risk and financial circumstances.

© All content is the copyright of Platform Publishing & Media Ltd 2020. For further information, please email info@villageonline.co.uk