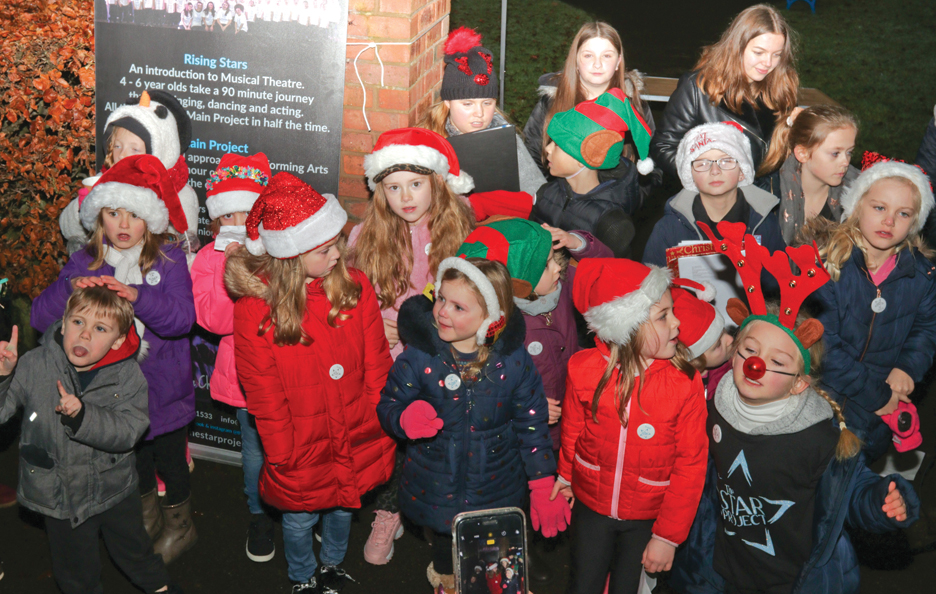 Villagers in Barnt Green, Blackwell, Lickey and Alvechurch celebrated the start of Christmas with music and light.

Barnt Green added to its decorations this year with new lights adorning a tree in Millennium Park, and the big switch-on was performed by Santa, who also handed out sweets and greeted his young fans. Blackwell Concert Band and youngsters from Star Project (above) provided the entertainment, while villagers enjoyed seasonal refreshments.

In Blackwell, the fun began with prizegiving for Lickey & Blackwell Parish Council’s annual Christmas competition – this year’s eco-friendly theme was “I’m dreaming of a Green Christmas”, with the winning entry made into the council’s Christmas card.

All entrants received a present from Santa before carol singing and lighting of the tree outside The Wheel. Everyone then walked up to the Blackwell First School Christmas Fair where Santa entered his grotto.

Lickey held its traditional Christmas concert at Holy Trinity Church, with music from Lickey Hills Primary school choir and Blackwell Concert band, and more prizegiving for the parish council’s Christmas competition. Santa was on gift-giving and tree-lighting duty as usual, as well as having a boogie with fans of various ages!

He was also in action at the school and nursery’s Christmas Fair, which featured an icy grotto, elves and even donkey rides.

At Alvechurch’s switch-on event, the Bromsgrove Town Crier led the countdown after carols from Alvechurch Community Choir and the announcement of the winner of the parish council’s Christmas window competition – this year’s prize went to The Lounge for its handmade display (below left).

Crown Meadow First School held its Christmas Fair that same evening, so children and parents formed a lantern procession from The Square to the school after the tree had been lit. Meanwhile, Alvechurch Baptist Church was serving mulled wine and playing carols in its forecourt. Those walking past the church in daylight could view the natural decorations outside.