Pies to please a crowd 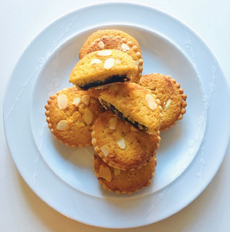 The flavours of Christmas are not for everyone, and if you don’t like the distinctive tastes of cinnamon, nutmeg or cloves, a lot of festive treats are off the menu.

This recipe can be used to make traditional mince pies, or substitute some of the fillings for options to please a crowd: I used plum jam, cranberry preserve and apple sauce, to make a variety. If you have people who want to dodge the mincemeat option, don’t do what I did and mix them all up when I took them out of the tins… mince pie lucky dip!

I used shallow, 12-hole non-stick bun tins and the ingredients below made 18 pies. This can be easily doubled and they freeze well.

18 tsp of your chosen fillings

Handful of flaked almonds, to decorate

2) Make the frangipane by beating together the butter and sugar until pale, then gradually adding the egg, mixing to combine. Carefully fold in the flour and almonds, using a metal spoon, so that you don’t knock the air out of the mixture.

3) Unravel the pastry and roll it out lightly, to even the surface and make slightly thinner.

4) Using a fluted cutter that is larger than the holes in your bun tin (my cutter was 3 ½ inches) stamp out circles of pastry and use to line the bun tins, re-rolling the pastry cut-offs as necessary.

5) Put a scant teaspoon of your chosen filling(s) into each pastry case and smooth over.

6) Use a heaped teaspoon of the frangipane to top each pie, smoothing up to the edges of the pastry, to cover all the filling.

7) Sprinkle each pie with flaked almonds and put the tins into the oven, on top of the hot baking sheets (this is for the avoidance of soggy bottoms!).

8) Bake for 20 mins, swapping the trays over at half time.

9) When the frangipane is golden and springs back to the touch, take the pies out of the oven and remove from the tins on to cooling racks.

9) Either serve warm or allow to cool completely, ready for freezing.

Previous articleClosed for Christmas
Next articleCheck out the choir online

Let’s go on a journey