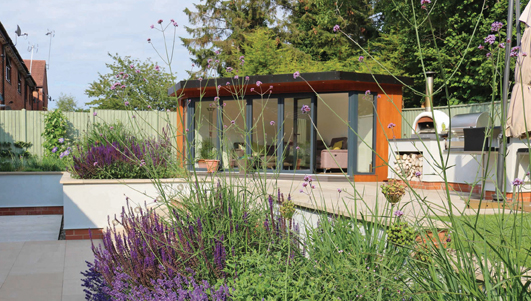 Steve and Maggie Busfield contacted me about their garden in Hanbury – they had done all the work on the house but didn’t like the garden and couldn’t envisage how to change it. Their style in the house was very modern and the garden needed to be an extension of this, and they were particularly keen on having an area to cook and eat outside.

The garden forms an L-shape around the house. The modern kitchen was an extension on the back of the house and, as often happens, the extension had eaten into the garden, so the garden wall was very close to the back door and made the patio area outside the door very tight and small. There was also an issue with the walls as they did not have proper drainage behind them and so were swelling and cracking.

Steve and Maggie also wanted a summerhouse so they could enjoy the garden space all year. In a smaller garden like this, it is important that the summerhouse structure does not impose itself on the garden, so a corner one seemed the ideal solution.

I started the design as I always do, with hand-sketching the areas to see what feels right, and straight away the back-door area needed pushing out to create space outside the kitchen and widen the steps up to the main area of the garden. This also allowed the planted borders to be viewed from the kitchen table instead of just looking out at a garden wall.

The main patio area was then transferred to the higher area of the garden, which is the sunniest part. The summerhouse was designed in the corner, as I mentioned earlier, and went in while the hard landscape work went on. The outdoor kitchen is to the right of the summerhouse, complete with pizza oven, cooking area and a high table to sit at.

There was only one area where this garden was overlooked and we sorted this with some lovely pleached hornbeams, but during the build we had to move them as the neighbours were not happy with the shade they created.

We moved two of them and they now create a divide between the summerhouse and where the greenhouse will eventually go, and do the same job as the archway would have done in the design. In fact, the summerhouse creates perfect privacy in this area of the garden now, so I needn’t have worried.

Although the design is very modern with clean, sharp lines, I was very keen to get plenty of soft, exuberant planting in as well, using grasses and perennials to create a modern effect but still make it a garden which is good for wildlife.

I used the ornamental grass Panicum virgatum ‘Rehbraun’ – with its soft panicles and autumn colour it is an excellent grass for this, and looks wonderful with Vebena bonariensis and Aster × frikartii ‘Mönch’ with its bright purple daisy flowers which go on well into the autumn. The planting fills the beds and spills onto the modern paving, giving a softening effect.

Steve was very keen to have a go at growing some vegetables in the beds to the left of the summerhouse. He has done really well at this and enjoyed it so much he wants to put in a small greenhouse next spring.

This summer he’s grown the San Marzano tomato outdoors; this Italian tomato is said to be the best for pizza sauces and passata as it has few seeds and excellent flavour. Steve and Maggie have also, at my suggestion, grown the yellow courgettes and are just now harvesting a white-flowered runner bean.

We created a herb bed at the top of the low wall and the thyme is growing particularly well. This autumn we are planting some soft fruit; raspberries, both autumn and summer, which should fruit continuously from June to late October, and a few currants grown as cordons as the space is tight, but the area where we are planting these has plenty of sun.

Looking from the house, the right-hand side of the garden beyond the lawn was the perfect place to introduce a few small trees and some shrubs for more colour and interest throughout the year. The rowan tree Sorbus ‘Cashmiriana’ is a small tree, only reaching three to four metres in about 20 years, and has pearl-like creamy white berries throughout the autumn.

We also planted the shrub Cornus alternifolia ‘Argentea’, a plant which crosses over between a small tree and large shrub. It reaches a height of two and a half metres, but looks delicate with its long, variegated leaves, and its growth habit is spreading.

This bed is shadier than the rest of the garden, and to give it a “woodland” feel we planted up with perennials like white foxgloves, Anemone x hybrida ‘Honorine Jobert’ and English bluebell bulbs to naturalise underneath.

All these projects are created and built as part of a team, and here I must say a massive thank you to Jeff Annand and his guys for doing such a superb job on the hard landscaping – it was pretty much perfect.

Maggie and Steve were great clients too, and we still see each other as I’m planting a few more bulbs and soft fruit this autumn. To finish I thought I would quote what the garden means to them: “We love our garden now, especially the outdoor cooking area which is great for friends and family parties. The garden room means we are outside all year enjoying time together and the tranquillity.”