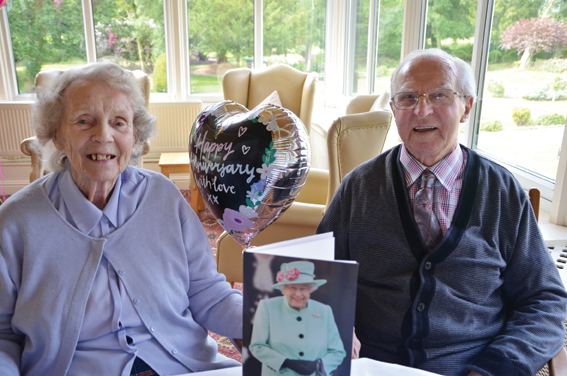 Georgina and Arthur Mitchell’s tea party was attended by their daughter, Hazel, and son-in-law, Ken, plus fellow residents.

Arthur, 91, said, “We would like to say a big thank you to Burcot Grange for giving us such a memorable day. The secret to our long and happy marriage has been a lot of love, tolerance and a shared Christian faith.”

The couple, originally from Glasgow, were members of the same church from an early age and their friendship blossomed into love. After serving in the RAF and returning to civilian life, Arthur proposed to Georgina.

They went on to have two children, Hazel and Derek, before moving to Hereford for Arthur’s work as a metallurgist.

They moved to Leominster in 1992 and lived there until 2016 when they moved into Burcot Grange. They have recently become great-grandparents.

Vicky Osborne, general manager of Burcot Grange, added: “They are a wonderful couple and we wish them many more happy years together. We took plenty of photos to share with their family in Scotland who were unable to attend in person.”