No need to knead 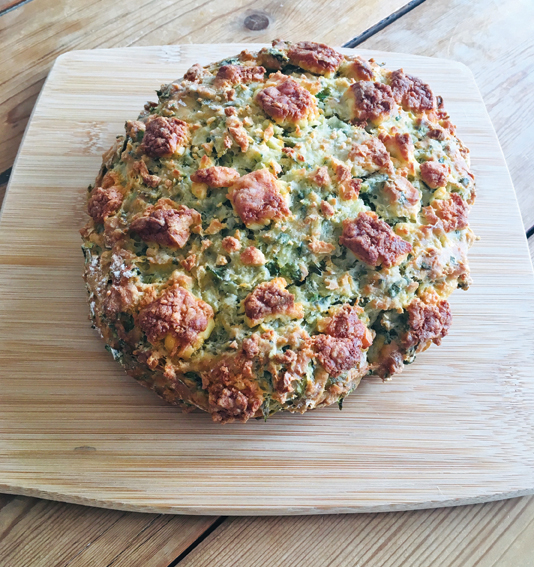 Watercress, in season this month, has a long history of cultivation in the UK. It originally travelled by train, with “the watercress line” running from Hampshire where it was grown to London to be sold at the markets. Its punchy, peppery taste is a distinctive seasonal treat.

This bread is easy to make; it’s literally combined and then baked – no yeast, no kneading, no rising. It isn’t the sort of bread you can slice for sandwiches, but works beautifully as part of a ploughman’s lunch, or partnered with watercress soup.

175g self-raising flour, plus a little extra to dust the top of the loaf

2) Sift the flour into a large mixing bowl, add the chopped watercress, two-thirds of the cheese, the chives and the salt.

3) Peel the potato and, using the coarse side of a grater, grate it straight into the bowl. Mix with a palette knife to combine.

4) Beat the egg and milk together and gradually add it all to the mixture, folding in with the palette knife, until you have a loose, rough dough.

5) Transfer the dough to the baking tray and, keeping the rough texture, pat it gently into a 15cm round.

6) Lightly press the remaining cheese over the surface. Sprinkle with flour.

7) Bake the bread on the middle shelf of the oven for 45–50 mins, until golden brown.

8) Cool on a wire rack before slicing.

Let’s go on a journey