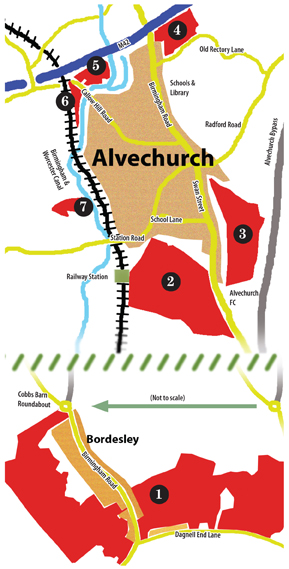 Depending on your point of view, this map could look like a fantastic opportunity to expand a village into a vibrant near-town . . . or it could leave you feeling surrounded, like beleaguered Britain in the Dad’s Army title sequence.

Whichever way you look at it, the red shapes on the left – all currently in the Green Belt – could mean an enormous change.

They make up around 2,200 new homes. To put that into perspective, the whole parish area currently has around 2,350 homes and Alvechurch village 1,700.

Doubling the size of a settlement is something that should be planned very carefully, with an over-arching vision to improve the lives of present and future villagers (or townies!)

That is the aim of the Alvechurch Parish Neighbourhood Plan (APNP), which is being prepared under powers created by the Localism Act of 2011.

It has been six years in the making, so far, and while these proposals by developers have no doubt been in the pipeline far longer, it is the consultation on the APNP that has brought them together as a stark vision for Alvechurch parish.

And there may well be other potential development sites yet to be revealed: the ones here are those raised by developers in the process of submitting their responses to the APNP.

It may come as a shock to many villagers to find, for example, that the view they currently enjoy from Alvechurch of Newbourne Hill rising up to Rowney Green may, in the not-too-distant future, have at least 250 homes in the foreground as the fields either side of the bridlepath behind Sandhills Nursery are bulldozed. Similarly, the views over the fields south of Station Road might one day be filled with new roofs.

The big developers’ latest submissions to the APNP process are, for now, being set aside and the parish is forging ahead towards getting the plan adopted.

But the housebuilders will keep pushing: it is a gradual process, by which the industry has softened up public opinion enough that the APNP itself accepts there may need to be “some Green Belt release” of land around the village in the future.

Even this provision is not enough for some housebuilders who say national planning policy has changed and the fact there is going to be a Green Belt review as part of Bromsgrove’s District Local Plan means the APNP should be put on hold.

For example, Taylor Wimpey, which wants to build 250 homes between Swan Street and the Alvechurch Bypass, says they are: “concerned that progression of the Alvechurch Parish Neighbourhood Plan is premature.”

And the agent for Gallagher Estates, which wants to build 1,300 homes in the parish at Bordesley and 300 behind Station Road and School Lane close to the centre of Alvechurch village, refers to the “Barntchurch” Strategic Growth Study.

This is the report attempting to sledgehammer people into submission by suggesting we need to allow a 15,000-home settlement between Alvechurch and Barnt Green to take overflow housing from Birmingham.

For now, such submissions are being resisted, but this activity shows the importance of villagers getting behind the APNP process.

We also have the chance to find out more about the District Local Plan, starting with “Issues and Options” events being organised across The Village area. As we went to press, the date for the Lickey & Blackwell consultation was set for October 1 at The Wheel, Blackwell, from 7–7.45pm.

The date for the Alvechurch event is October 16, from 3–8pm in the committee room at Alvechurch Village Hall.

(The brown areas show the present built-up residential areas. The representation of Bordesley is to a smaller scale than Alvechurch.)